Cecil the lion. A legend in Hwange National Park. A true drama, a story of territory, a coming of age and a power struggle of coalitions. Cecil was a force of nature, he exuded a supreme prowess. This is not a story of his death, this is a story of his life and the legacy of a legend that was gone before his time. 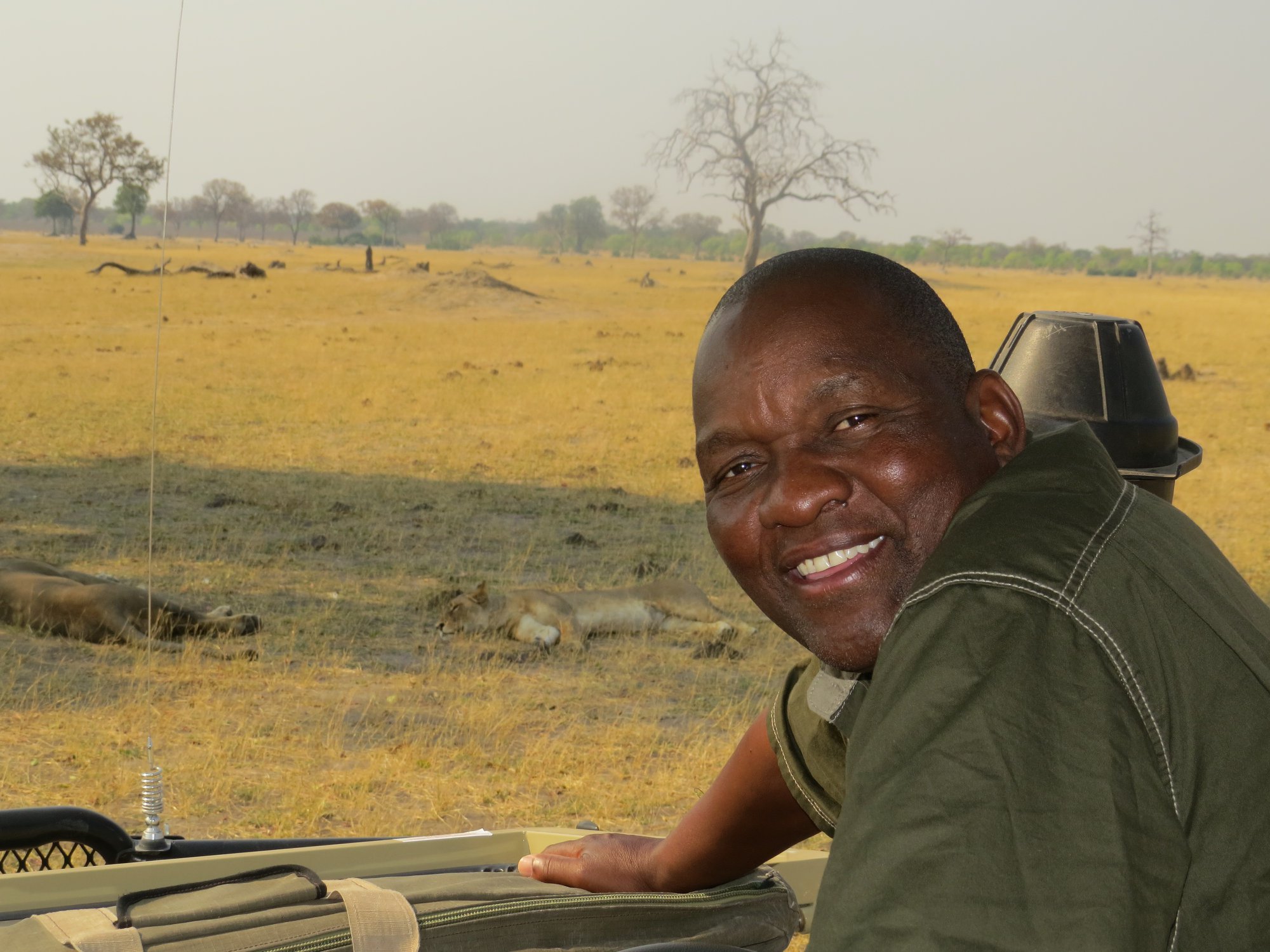 The story starts around the campfire. Our guide, Calvet, is passionate about this tale of territories. Growing up in a small village in Southern Zimbabwe instilled a passion for the African Bush in him. He ventured into guiding in 1995 and brings a wealth of knowledge and contagious enthusiasm for the wild. Calvet has incredible story-telling capabilities, especially when it comes to Cecil’s story. His jocular manner and engaging insights offer an intimate and enriching safari experience. He speaks of the lions as if they are old school friends. We gather around the fire at Somalisa Expeditions, where some of the best stories have been told. We sit in anticipation, knowing an epic tale is coming. 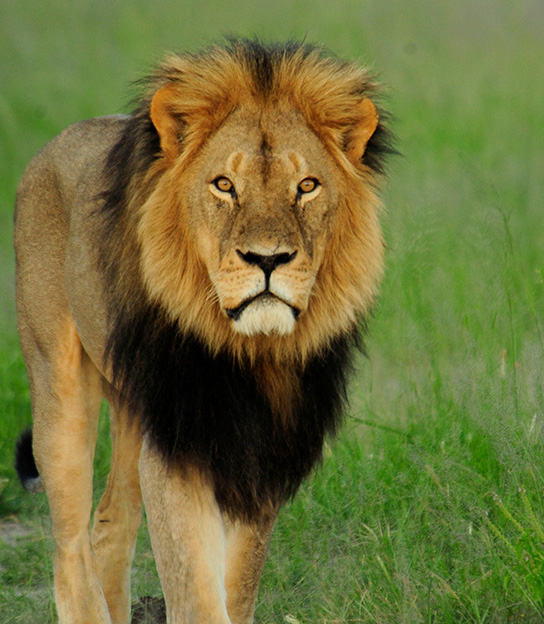 Cecil was being tracked by a collar and researched,  which is why he was named. He was the Hercules of Hwange National Park. He was so prominent that many travellers came from far and wide to see him. The epitome of what you would expect a lion to represent. With a thick black mane, and mighty frame. With golden eyes that look right through you and confidence unparalleled, he was a sight to behold. A legend of the land.{{cta(‘e861441c-480a-4bb4-a899-f0159779d604′,’justifycenter’)}}

“It all started with Cecil and his son Xanda, they had a pride of 16 strong.” Calvet begins. They dominated the Eastern territory of the National Park in the Linkwasha Concession. Until brother coalition, Bush and Bhubesi, appeared from the Northern territory. Cecil and Xanda battled with them, you can imagine what kind of scene it must have been when four large males fought. Brute strength. Aggression. The bellow and thunder of lions roaring and blood. Cecil and Xanda managed to hold their ground and chased the brothers. The territory was safe. For now.

“This is when Cecil makes a mistake”, Calvet says. After this confrontation, Cecil notices that his son is becoming stronger. Threatened by this, he chases him out of the pride. This is the chance Bush and Bhubesi have, to expel Cecil from Linkwasha, once and for all. And that is what they did, being only one male, he couldn’t stand his ground against the brothers.

“In 2013 Beks, Founder of African Bush Camps, lured me here to Somalisa.” Calvet recalls. “At the same time, Cecil had been chased out of his territory. So, he followed me here.” Having followed Cecil’s story in Linkwasha you can tell this intensifies Calvet’s connection to Cecil and passion about his story. 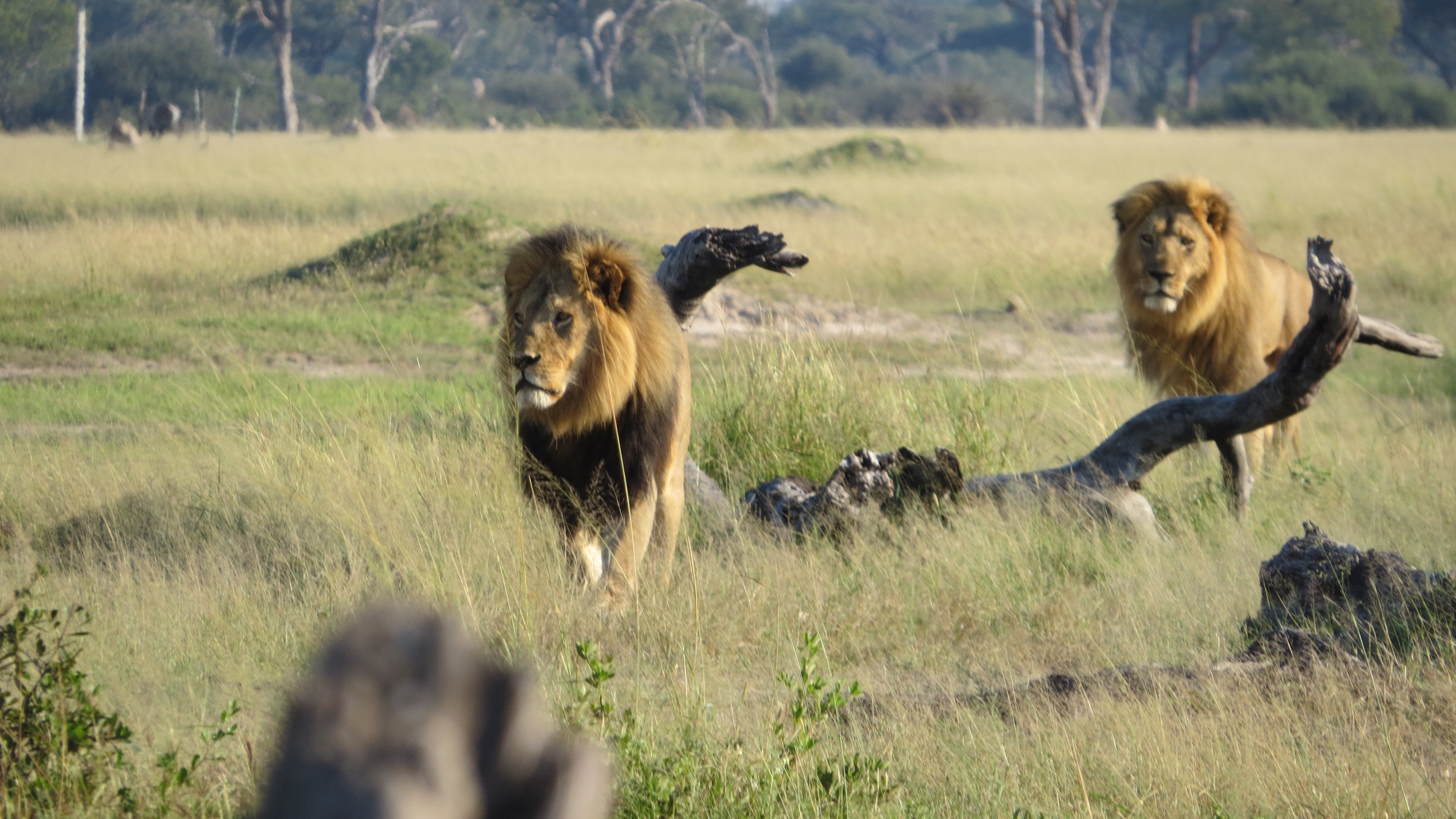 Kokore was the resident lion at the time. Cecil was thin and deteriorating at this stage, not offering much stamina or strength. He tried to submit to Kokore at the chance to form a Coalition. Kokore rejected him defending his territory, concerned that Cecil would kill his cubs in the pride.

Cecil found Jericho, another large lone male. The two had some history. “Legend goes, that the father of Jericho, killed the father of Cecil, fighting. Meaning that they were not friends.” Putting their differences aside, they joined forces and moved into the Somalisa Concession. But even though they were a strong force together, unrest and turmoil still arose between the boys. They had many fights in the time they reigned. With so much testosterone hanging in the air, dominance over food and females caused tensions to rise, but no matter what, they always reunited to remain a united force. Once they had found each other they knew they were stronger together than they ever would be apart.

“They advertised,” Calvet says, with a big burly voice, imitating the roar of the brutes. In this roar lies many messages. They’re expressing to the females in the area that they’re looking to grow their pride. At the same time the roar expresses to the males they are ready to take over, by any means necessary. When a lion roars, it reverberates in your being and strikes fear into your soul. It takes you to your ancient roots and sends you to a wild and true Africa. You understand instantly why they are at the top of the food chain. The louder and more intimidating they sound, the more they appeal to the lionesses in the area.

Hearing the two large males, Kokore was not impressed. He came to confront whoever was in his territory, but when he saw the size of them together, he retreated, leaving his pride in submission. Cecil and Jericho were on top, kings of Somalisa. They introduced themselves to the pride’s lionesses, but they ran away trying to guard their cubs. 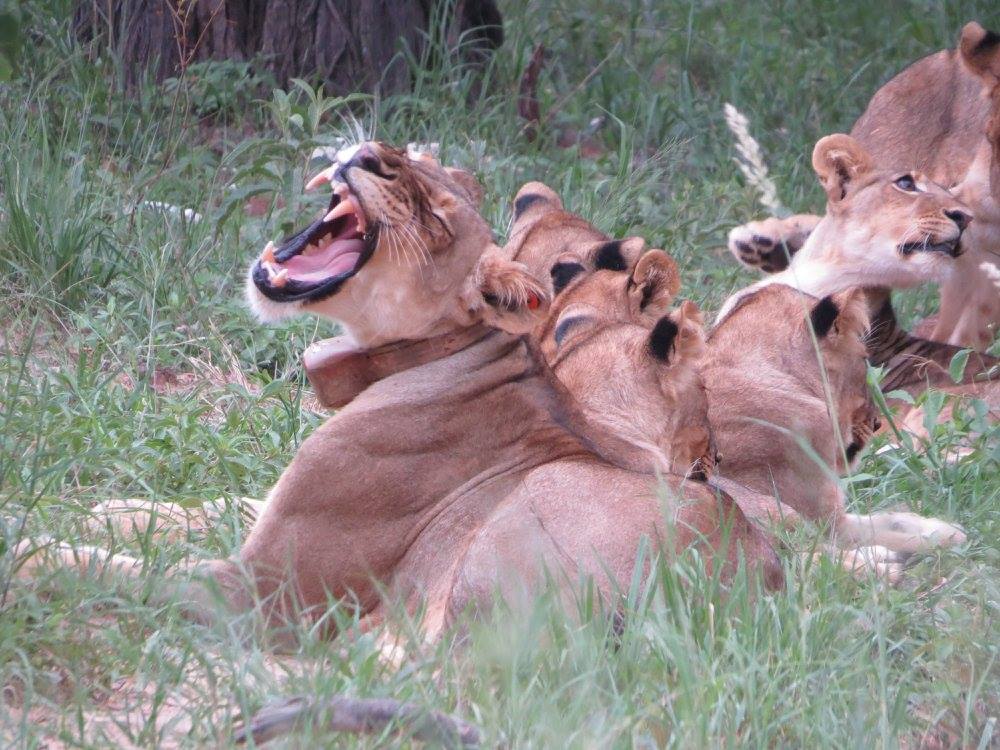 One of the ‘Spice Girls’, ‘Nobuhle’, meaning “Mother of beauty

Unperturbed, Cecil and Jericho continue ‘advertising’ to publicize that they are in charge and looking for lionesses to carry on their legacy. Hearing the sheer strength and power in their roar, three lionesses appeared, called ‘The Spice Girls’. They saw Cecil and Jericho and thought “Yes, these are the guys we want, let’s see what’s going to happen here”, Calvet says.

In 2014 they ‘entertained’ the boys, Calvet says, giving a cheeky smile and a laugh.

So, the Spice Girls stayed with the boys for a while. The lionesses mated initially in a false oestrus to create bonds and build trust with the boys. In mid-2014 the girls went into true oestrus. They trusted Cecil and Jericho by this time. By September that year they were pregnant and December 2015, the spice girls had 7 cubs. Two boys and five girls. “Happy family” Calvet, says with a jubilantly, and for a while they were living the perfect life in Somalisa. The pride had grown to 12 strong, Jericho was submissive, so it is believed that all the cubs were Cecil’s.  Yet the growing pride meant different challenges…

The Beginning of the End 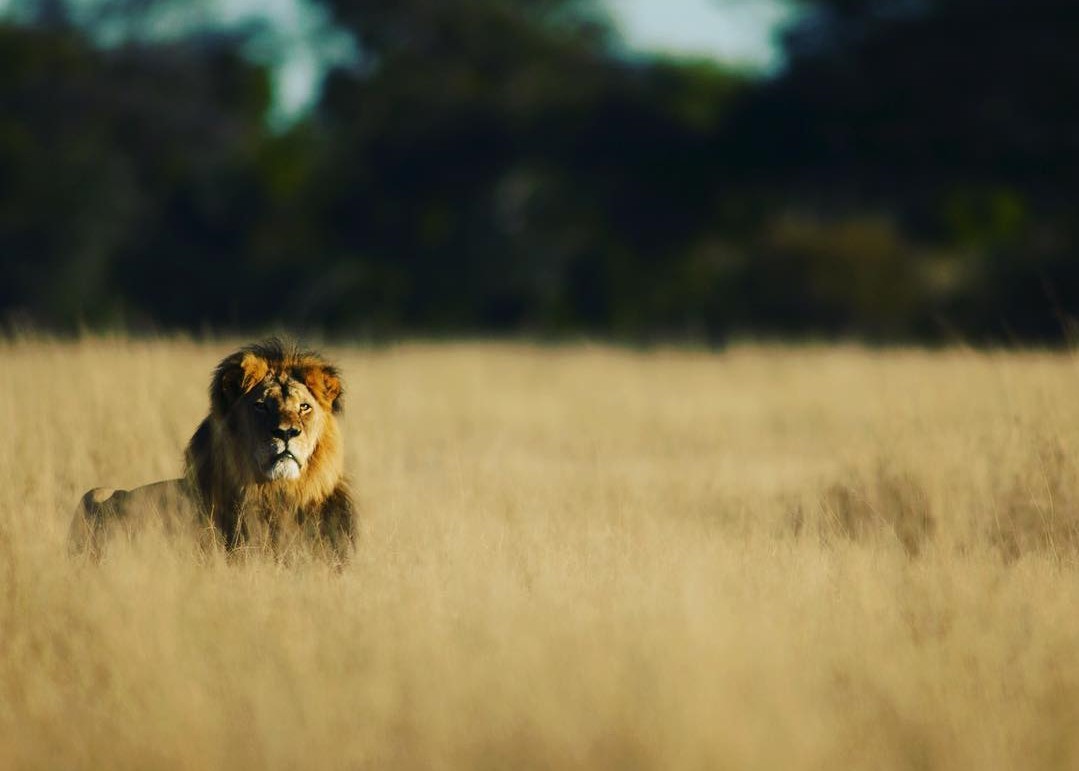 The growing pride meant that they were struggling for space and food. They needed to extend the territory. Jericho ventured further North up to Kennedy 1, near the railway line. Beyond the line is the forest concession, also known as the hunting area. Jericho found a lioness called Cathy, who was alone. She was an old lioness. Calvet says “She didn’t give birth but was entertaining the boys.”

Jericho reports back to Cecil that he found a larger territory. Jericho and Cecil move North to Kennedy 1. “Cecil saw Cathy and he was so happy, he probably said ‘Well done my friend, Jericho.'” Calvet says with a big laugh while patting me on the back, acting as if he were Cecil.

They were staying with Cathy for longer periods. They would come back to Somalisa briefly and then go back overnight. A week at first, they would come back, to check the kids, then head back to Cathy. They started staying longer and longer. “And that is when the trouble happened”.

In July 2015, Cecil had been in the north of the park for over a month. On the boundary of his fate. That was the infamous moment where Cecil met his unfair and cruel fate. He left the safety of the National Park and crossed over into a hunting concession. Calvet declares that “they chose Cecil because he was handsome.” 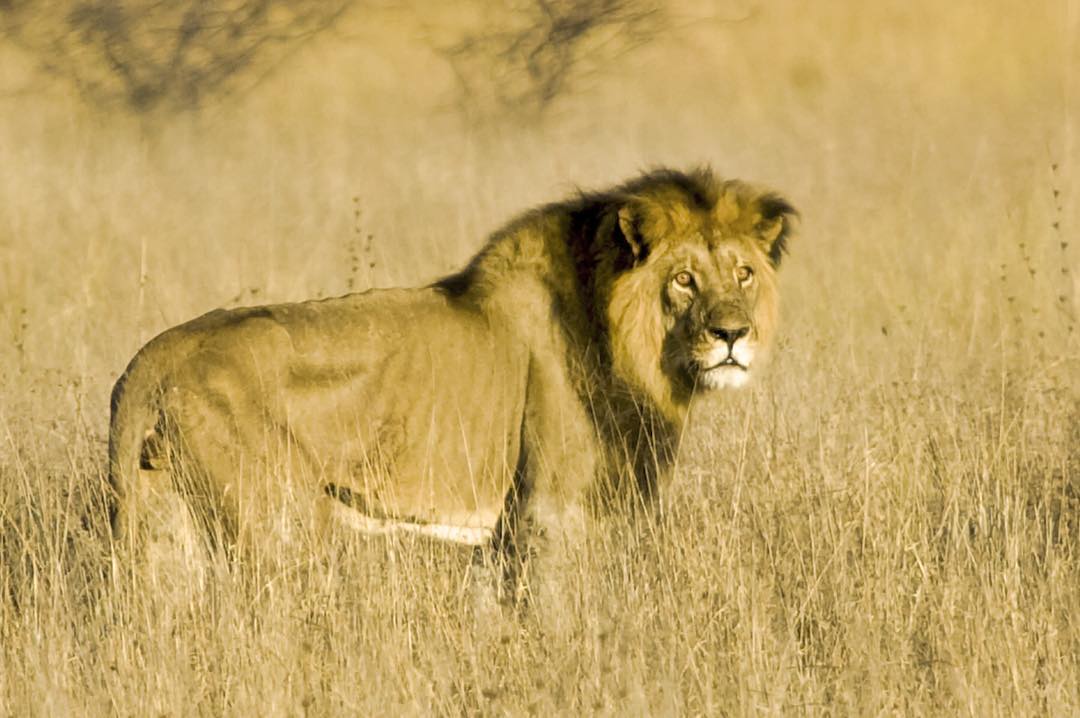 This incident sent shock-waves across the world. The guides in the park and on the ground, who had come to know Cecil were all shaken. Many of the guides in the area have an affinity to Cecil. Guests would come from overseas to see this large force and, just like that, he was gone.

All you can hear is the crackling of the fire with some contemplative stares. You can hear some tension in Calvet’s voice. Tension hovering in the air. It feels like it’s the end of the story, but it’s not. As with the rhythm of the African sun, it rises again, and life moves forward. Like many of the guides in the area, Calvet moves his focus on the legacy that lives on in the pride Cecil left behind.

Jericho stayed in the North. He didn’t come back to defend the pride. He stayed with Cathy – joined by two other lionesses, who he mated with and became a father of 5.

Being such a marvel, Cecil leaves a legacy behind him that lives on. Cecil’s cubs are in the Somalisa Concession still, with the ‘Spice Girls’. The story of Cecil’s Pride continues. As the cubs grow up, they carry on the legend. As the pride shifts and changes, people from around the world come to see his legacy live on. Who is the new ruler of Somalisa? Read Part 2: Cecil’s Pride to find out what happened to the cubs and the return of Bhubesi…